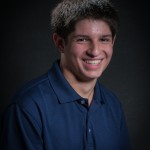 Max Notarangelo has big dreams – then he builds them! Currently, he is the Captain of the Sammamish High School robotics team and has competed nationally with the robots they’ve constructed. Having shorter school days at Chrysalis has allowed him to pursue his interests outside of the classroom. He’s taken a welding class, an online programming course at Stanford and even pursued his dream of starting his own company – Clockwork Development. The business he started is almost ready to publish its first iPhone app! He has also served this year as JSA co-president and was a National Merit Scholar based on his exemplary PSAT and SAT scores. Next year, he’ll continue the pursuit of his dreams when he attends Quest University in British Columbia, Canada, where he plans on majoring in liberal arts with an emphasis in physics and math. We wish him all the best as he moves forward “building” his dreams!